By No To Assisted Suicide
Posted September 14, 2015
In News
Huffington Post: Fiona Bruce- No Ordinary Debate, No Ordinary Day in Parliament, No Ordinary Decision2015-09-142015-09-14http://notoassistedsuicide.org.uk/wp-content/uploads/2015/06/no-to-assisted-suicide-logo.jpgNo To Assisted Suicide - UK's campaign to stop assisted suicide.http://notoassistedsuicide.org.uk/wp-content/uploads/2015/09/The-Huffington-Post-logo.jpg200px200px
0
0

As has been said many times since Friday’s second reading debate on the Assisted Dying (No 2) Bill, we saw Parliament at its finest then. I have not sat through a debate in which so many Members of Parliament have come determined to listen so intently or been so determined to weigh up seriously all the contributions of fellow Parliamentarians. Nor a debate where so many were clearly not only scouring their consciences, but also plumbing the depths of some of their most heartfelt experiences, both personal and professional. Too, it was clear that MPs had not only received, but also carefully read and were considering the many hundreds of emails, cards and letters from concerned constituents received prior to the debate. A great proportion of these were individually written – a far cry from the identikit duplicates organised by lobby groups we all too commonly receive. So many of these letters were relevant, detailed, reasoned, and yet also from the heart. Large numbers of MP colleagues had visited their local hospice, held public meetings, met with concerned disabled groups, or met concerned constituents at surgery in preparation for the debate to gain as much practical understanding of the issues involved and listen to those with direct and relevant experience.

And so as the morning progressed and colleagues spoke, you sensed from the gathering of contributions a collective determination to do all we could to understand the complexities of this subject: a wanting and willing to understand it in depth and hear all perspectives, before making a decision. A decision which would not be made merely by basing it on a simplistic single figure produced through a flawed and unrepresentative poll initiated by a well funded lobby group supporting the Bill. Our constituents, indeed the country, deserved far better than that.

Huffington Post
Recommended Posts
Recent news
Like us on Facebook
NO TO ASSISTED SUICIDE
This site is managed by Dr Kevin Yuill and a small team of volunteers.

The Spectator: As a GP, I felt the lure of assisted dying. That’s why I oppose it.News 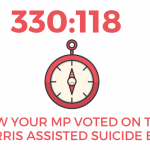 330:118 – How your MP voted on the Marris assisted suicide BillNews