The Oregon State Public Health Division brings out an Annual Report each year, and in 1998, the year in which the ‘Death with Dignity’ act, legalising assisted suicide in Oregon took effect, it reported that 13% of patients applying for medication to commit suicide did so because they were frightened of being a burden on their families. This percentage has substantially increased since, even whilst fluctuating, to the extent that in 2014 almost four times more patients (40%) were opting for assisted suicide for this reason. In 2012, only three years ago, this figure had exceeded it, at 57.1%. Meanwhile, in Washington State, which also uses a similar system, the most recent figure for this reason cited by those opting for assisted suicide is 61%. All of this illustrates the degree to which a so-called ‘right to die’ afforded by the Oregon system (more accurately a right to be killed) can in fact become a duty to die, violating rather than supporting patient autonomy.

2. People suffering from depression and dementia are receiving assisted suicide

Reports of individual assisted suicide cases show that patients are receiving assisted suicide in Oregon who suffer from depression and dementia, and 2008 study published in the British Medical Journal examined 58 Oregonians who sought information on assisted suicide. Of them, 26% met the criteria for depressive disorder, and 22% for anxiety disorder. Three of the depressed individuals received and ingested the lethal drugs, dying within two months of being interviewed. The study’s authors concluded that Oregon’s law “may not adequately protect all mentally ill patients”.

This can be because patients do not receive psychiatric evaluation. Last year, only 3 of the 105 patients who committed assisted suicide were referred for psychological examination. This is a huge problem given that evidence suggests that that most patients requesting death do so not based on physical symptoms such as pain or nausea, but rather based on depression and other forms of psychological distress.

Research overwhelmingly shows that people with new disabilities frequently go through initial despondency and suicidal feelings, but later adapt well and find great satisfaction in our lives(1). This adaptation usually takes considerably longer, however, than the mere 15-day waiting period required by Oregon law. People with new diagnoses of terminal illness appear to go through similar stages(2). It is too easy for many people to make the final and irrevocable choice to end their life before they have the chance to learn the good quality of what their life can be.

Whilst proponents of the Oregon system have lauded its limitation to terminally-ill people, Oregonian assisted suicide advocates have already tried to expand the legislation to bring more people under its remit. The ‘slippery slope’ is happening before our eyes.

In fact, the ‘slippery slope’ is a logical cliff, as demand for the practice, and the premises in justification for it (autonomy, choice, the right to die, etc.), when granted, cannot reasonably be limited to just one group of people. William L. Toffler, professor of family medicine at Oregon Health & Science University in Portland, and a licensed physician for 35 years, describes his own first-hand experience:

‘In my practice, more than two dozen patients have discussed assisted suicide with me. Most did not have a terminal diagnosis. One inquiry came from a patient with a progressive form of multiple sclerosis. He was in a wheelchair yet lived an active life as a general contractor. I asked him how the disease affected his life. He acknowledged that MS was a major challenge and told me that if he got too much worse, he might want to “just end it”.’

Under the Oregon Health Plan, the state’s ‘Medicaid’ (state-provided healthcare) programme, some necessary services and medicines – including some analgesic drugs to relieve pain – are not covered, but assisted suicide (which is cheap to provide) is covered. According to Oregon’s ‘Prioritised List of Health Services 2015’, cancer treatment is limited according to relative life expectancy: ‘treatment with intent to prolong survival is not a covered service for patients who have progressive metastatic cancer…’(Guidance Note 12). In contrast, ‘It is the intent of the Commission that services under ORS 127.800-127.897 (Oregon Death with Dignity Act) be covered for those that wish to avail themselves to those services’ (Statements of Intent Page 1).

Margaret Dore, a specialist in elder law, has extensively documented how the Oregon and Washington State assisted suicide laws, contrary to the rhetoric, dramatically undermine patient control. In a May 2009 article on the website of the King County (Seattle) Bar Association, she pointed out:

‘During the election, proponents touted [assisted suicide] as providing “choice” for end-of-life decisions. A glossy brochure declared, “Only the patient—and no one else—may administer the [lethal dose]”. The Act, however, does not say this—anywhere. The Act also contains coercive provisions. For example, it allows an heir who will benefit from the patient’s death to help the patient sign up for the lethal dose. … The Act also allows someone else to talk for the patient during the lethal-dose request process, for example, the patient’s heir. This does not promote patient choice; it invites coercion…’

Dore also argues that, “Involuntary killing is not an ‘abuse.’ It is allowed by the statute”, and points out that assisted would actually restrict choice and self-determination by giving insurers a supposedly humane and dignified alternative to covering a patient’s health care and by making people with disabilities and chronic illness vulnerable to predators by removing the protection of illegality for assisted suicide.

From 2001 to 2007 a majority (61%, 165 out of 271) of the lethal prescriptions were written by a minority (18%, 20 out of 109) of the participating physicians. More striking still, just 3 physicians were responsible for 23% of lethal prescriptions (62 out of 271). This shows that those doctors with the least scruples are engaging in a proportionally greater number of assisted suicides.

This is a problem, because it means that patients who may not meet the eligibility criteria may engage in doctor shopping, which can circumvent the so-called safeguards. When the first physician a patient approached refused to comply with the request for lethal drugs, possibly because the patient didn’t meet the conditions of the law, the patient sought out a second physician, and in some cases, a third and a fourth, until someone eventually agreed to write the prescription.

As the International Task Force on Euthanasia and Assisted Suicide stated(3) to the Montana Supreme Court in April 2009:

‘Many other patients seeking assisted suicide have … had to ask more than one physician for the lethal prescription. There is no way to know if physicians declined due to personal convictions, because they believed the patients were not terminally ill or because they determined that the patients had impaired judgment. During the first three years of legal assisted suicide in Oregon, reports indicated that, in 59 percent of cases, patients had to ask two or more physicians before receiving the lethal drugs. After the third year, official reports stopped including this category. Patients or their families can doctor shop until a willing physician is found. And, since non-prescribing physicians are not interviewed for official state reports, there is no way to know why they refused to lethally prescribe’.

Whilst it is alleged that legalising assisted suicide improved end-of-life care in Oregon, the situation is more complex. Oregon has shown some improvements, but similar improvements have occurred in other states that did legalise assisted suicide, suggesting that this was just a general improvement in U.S. healthcare. Indeed, many states have done better than Oregon. By contrast, research strongly suggests that Oregon has seen a reduction in the quality of end-of-life palliative care during the years since the Oregon law went into effect. A 2004 Journal of Palliative Care Medicine study showed that dying patients in Oregon were nearly twice as likely to experience moderate or severe pain during the last week of life, as reported by surviving relatives, compared with patients before the Oregon law took effect. An article in The Oregonian about the study stated, “The findings call into question the widespread view that pain control at the end of life has improved markedly in Oregon.” In 2008, American experts on end-of-life care and suicide prevention Herbert Hendin, M.D., and Kathleen Foley, M.D., discussed a number of studies that show inadequate palliative and end-of-life care in that state.

In Oregon, between 1999 (two years after assisted suicide was introduced) and 2010 the suicide rate among those aged 35-64 increased by almost 50% (compared to 28% nationally). Oregon’s largest city, Portland also sees high levels of suicides. What this has suggested is that assisted suicide exacerbates the number of suicides, as the idea of ending one’s own life becomes normalised.

As seen above, the Oregon State Public Health Division publishes a ‘Death With Dignity’ Act Report every year. Whilst it yields some interesting information, it functions as minimal data collection, and there is no strong oversight of assisted suicide exercised by the State Government. Whilst the law requires doctors to report any prescription they make of lethal drugs, there are no penalties for those who fail to report, and so no enforcement of this requirement. Nor is this noncompliance, underreporting, or any violation monitored by the State Health Division, admitting in its first year that “[W]e cannot detect or collect data on issues of noncompliance with any accuracy”, and other reports admitting that “[O]ur numbers are based on a reporting system for terminally-ill patients who legally receive prescriptions for lethal medications, and do not include patients and physicians who may act outside the law”.

Since the information is voluntarily reported by doctors, no information is collected from patients, or their relatives, and there is no official means by which the public can complain about abuses of assisted suicide.

Finally, an Oregon State official, Dr. Katrina Hedberg. when questioned by the House of Lords Select Committee on the Joffe Bill in 2004 (pg. 262, question 592), acknowledged that State Health Division destroys each year’s underlying data records after it issues each annual report.

No wonder that an editorial in The Oregonian pointed out that the law established “a system that seems rigged to avoid finding” the answers(4). There may be many other abuses in Oregon, but the data the State Government releases is so limited, and so temporary, that is essentially hidden.

Oregon assisted dying, Oregon assisted suicide
Recommended Posts
Recent news
Like us on Facebook
NO TO ASSISTED SUICIDE
This site is managed by Dr Kevin Yuill and a small team of volunteers. 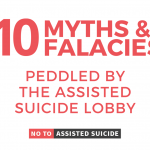 Top 10 Myths and Fallacies Peddled by the Assisted Suicide LobbyNews 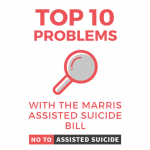